High-performance vehicles use a lot of energy and go through all manner of fluids rapidly throughout the 3 hr, 500-mile races that are held each week. From the water that the racers drink, the fuel the engines use to generate massive HP, and the specialty engine oil that contain additives for protection and performance, it can be hard to keep track of what exactly is swishing around in those fast-moving cars.

The oil blends that NASCAR teams use are not regulated to the extent that fuel and other vehicle components are. In the effort to keep NASCAR as a technology-driven sport, as well as a driver-driven one, race teams are able to work with oil companies and engine builders to formulate the perfect liquid for their vehicles.

Even though there is flexibility in the exact blend each team uses, NASCAR does have a preferred partner that supplies their custom racing engines with the right oil to win races and crush previous lap records. Read on to learn about the oil NASCAR uses. 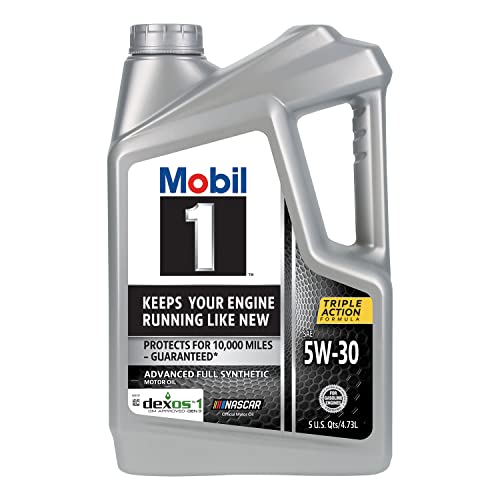 ExxonMobil is a long-time partner with motorsports. The Mobil 1 formula has been the choice formula and official motor oil for NASCAR since 2003. Mobil 1 is even the primary sponsor of some NASCAR and IndyCar race teams. It is estimated that about 50% of the vehicles running in the different NASCAR events are using some formulation of Mobil 1 high-performance engine oil.

However, just because some oil companies are able to pay higher sponsorships doesn’t mean all drivers need to use the official oil suppliers. Since the difference between a first and second-place car is usually milliseconds, having flexibility in oil types allows teams another area to try and find an edge.

What is the Capacity of a NASCAR Vehicles Oil Reservoir?

Streetcars have an oil capacity of 4 or 5 quartz and usually only need a change every 10,000 miles or so. While engine oil is extremely important for any vehicle, there is a lot more forgiveness in our cars than in NASCAR’s insane engine power and engine speed. In fact, despite long-standing partnerships with Mobil 1, the search for a better formula is a kind of arms race for both engine builders and race teams.

On average, NASCAR automotive engines hold 7 gallons of oil stored in a tank behind the driver’s seat. Despite the large quantity of oil, the custom race engines and the advanced motor oils going into them needs to be constantly refined and reinvented. Contemporary motor oils are utilized very efficiently and result in minimal fluid loss.

At the speeds NASCAR engines run, the oil needs to be moving through all motor parts and lines constantly or overheating and engine failures will occur.

The temperatures engines run at impact how oil and other fluids move through the internal components. At low temperatures, a thinner oil is needed to move effectively through the systems. When engine temperatures are hot, as is the case in the extreme conditions of a NASCAR race, then thicker oil will flow slower, allowing better cooling and lubrication to avoid engine failure.

Advanced formulas like Mobil 1 provide testing grounds for high-performance oils that offer long-term emissions compliance and catalytic converter preservation. Additionally, the synthetic blends of racing oils are designed to easily last the 500-mile races. Most engine oils consist of 15 to 20 individual components, all designed for the optimal performance of NASCAR’s far-from-basic V-8 engine.

Will Different Oils Have an Impact on a Race?

Many drivers use mobile 1 because of its superior performance, and using other motor oils could impact how well a driver does in a race. Although which blend of Mobil 1 oil each racer uses is another conversation. Special formulas are made for each team’s engine and the track they will race on. In fact, even in the same event, drivers will use one type of oil for the qualifying laps and another for the full 500-mile-long race.

Millions of dollars annually are spent by teams to work with engine builders and oil companies to develop newer and better engine oil technology. Advances like reduced friction from heavy viscosity grade engine oil can lead to even more horsepower generated at key moments in a race.

On top of that, additives that ensure long-lasting oil circulation can keep a fresh engine even during long races giving cars the needed burst at the end to finish the race strong.

Before qualifying laps, when NASCAR engines are still cool, a thinner viscosity oil is used and heated up to help the engine start up and allow cars to go full-throttle from the start. The benefits of an oil product developed for specific engines and events can help give racers an edge that a mandatory oil type wouldn’t. This would put engine oil in a fixed category like the fuel NASCAR uses, which doesn’t vary from racer to racer.

Why Does NASCAR Use the Oil it Does?

In a typical NASCAR race, stock cars are pushed to full throttle for 500 miles or so. It has become increasingly important for race teams, engine builders, and crew chiefs to all know what is going into the racing engines of their sports cars. Mobil 1 has been the official oil for NASCAR races for a long time and will continue to be so for the next couple of decades.

Oil needed to support the power of a NASCAR vehicle needs to be carefully devised and mixed exactly to ensure maximum potency.

The oils NASCAR uses have been meticulously formulated and mixed to improve engine startup, handle heavy engine loads, and keep all of the engine internals clean. To keep up with advancing engine technology, most teams have an engine test lab where they can try out the performance of custom race engines and oil formulas before they are installed into racecars.